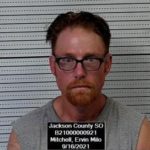 JACKSON COUNTY, Kan. (JASO) – Sheriff Tim Morse reports a Soldier man is in custody following a Thursday afternoon disturbance.  The Jackson County Sheriff’s Office received a report of a disturbance at 2340 238th Road, Soldier around 4:16 p.m.  Deputies found a female victim that it was reported had been strangled during the incident.  Deputies deployed stop sticks to disable the vehicle the suspect was driving southbound on K-62 Hwy north of the City of Soldier.  Deputies took the suspect into custody at that time.  Ervin Milo Mitchell, 45, of Soldier was arrested and is being held in the Jackson County Jail on charges of attempted 2nd degree murder, aggravated domestic battery, criminal restraint and criminal threat.