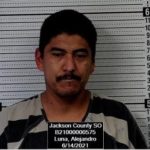 JACKSON COUNTY, Kan. (JASO)-Sheriff Tim Morse reports that a Topeka man was arrested around 9:30 p.m. Monday evening near 150th and Q. Road. A Jackson County Sheriff’s Deputy stopped a westbound white Chevy Avalanche for a traffic infraction. Deputies discovered a quantity of methamphetamine allegedly in the driver’s possession. The driver, Luna Alejandro, 41, of Topeka was arrested and booked into the Jackson County Jail for possession of methamphetamine with the intent to sell and having no drug tax stamp.