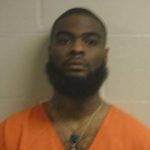 JACKSON COUNTY, Kan. (JASO)-Sheriff Tim Morse reports that a Nebraska fugitive is in custody following a two state pursuit Saturday night. A Holton Police officer stopped a 2015 Dodge Durango for a traffic infraction in the 400 Blk of Arizona Street in Holton shortly before 11 p.m. The suspect vehicle stopped in the Casey’s General Store parking lot. It was discovered that the driver, Davionne Marquise Starks-Briggs, 23, of Houston, Texas was wanted out of Nebraska on a felony robbery warrant. The suspect was to be considered armed and dangerous. The Holton Police officer attempted to arrest Stark-Briggs when he allegedly fled in his vehicle striking the Holton Police vehicle. Jackson County Deputies entered into the pursuit with Holton Police north of Holton on US Hwy 75. The pursuit continued into Brown County and into Nebraska. Several law enforcement agencies attempted to use tire deflation devices to stop the pursuit, however, the pursuit continued through Dawson, Nebraska and then east to Fall City. Just north of Fall City, the suspect vehicle left the highway and into the ditch. The suspect fled on foot from the vehicle heading east into a field. Jackson County deputies pursued the suspect on foot capturing him and taking him into custody about 200 yards from where the vehicle pursuit ended. Deputies from Brown County and Richardson County, Nebraska assisted with the incident. Starks-Briggs is currently being held in the Richardson County Jail and further charges are pending.