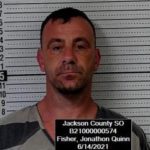 JACKSON COUNTY, Kan. (JASO)-Sheriff Tim Morse reports a man is in custody following a traffic stop on Q. Road south of 150th around 11:30 a.m. Monday morning. A Jackson County Sheriff’s Deputy stopped a 1998 Buick Park Avenue after identifying that the driver’s license of the driver was allegedly suspended. Deputies collected items believed to be methamphetamine and drug paraphernalia during the stop. The driver, Jonathon Quinn Fisher, 38, of Topeka was booked into the Jackson County Jail for possession of methamphetamine, possession of drug paraphernalia and driving while suspended.