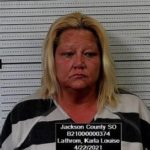 JACKSON COUNTY, Kan. (JASO)-Sheriff Tim Morse reports On April 22, 2021 at approximately 00:33 a Jackson County Sheriff’s deputy stopped a 2008 Chevy Impala in the 12000 block of 150th for a traffic infraction. Further investigation into the traffic stop led to the discovery of illegal contraband. The driver, Karla Louise Lathrom, 54, of Topeka, was arrested for possession of methamphetamine, possession of marijuana, possession of drug paraphernalia and driving while suspended. Lathrom was booked into the Jackson County Jail.