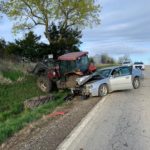 JACKSON COUNTY, Kan. (JASO)-Sheriff Tim Morse reports the Jackson County Sheriff’s Office received a report of an injury accident west of O. Road on Hwy K-16 involving a tractor around 7:45 am this morning. An eastbound farm tractor on K-16 Hwy was struck from behind by a 2004 Chevy Impala sending the tractor into the ditch. Jackson County EMS and the Holton Fire Department also responded to the scene. The female driver of the Impala received minor injuries and was transported for medical care by private vehicle. The driver of the tractor refused medical treatment. K-16 Hwy was shut down for a period of time while rescue personnel was able to clear the roadway.