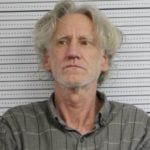 JACKSON COUNTY, Kan. (JASO)-Sheriff Tim Morse reports a Topeka man was arrested on Thursday on drug charges. A Jackson County Sheriff’s deputy stopped a 1999 Toyota Camry for a traffic infraction near 150th and Q. Road Thursday evening. The investigation into the traffic stop led to the discovery of a substance believed to be methamphetamine. The driver, Brian Joseph Wessel, 60, of Topeka, was arrested for possession of methamphetamine, possession of drug paraphernalia and transporting an open container. Wessel is being held in the Jackson County Jail.