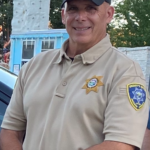 JACKSON COUNTY, Kan. (JASO) – Sheriff Tim Morse reports that he has appointed Captain Scott Morris to serve as Undersheriff.  Morris will replace outgoing Undersheriff Darrel Chapman who resigned his position on Wednesday to pursue a new career in the private sector. Scott Morris is a longtime resident of Jackson County where he raised his three children with his wife Paula.  Scott Morris for the last two years has served as the Captain of Patrol with the Jackson County Sheriff’s Office and was a part of the Sheriff’s Leadership Team.  During this time, Captain Morris also oversaw the JASO K-9 Program. Prior to coming to the sheriff’s office, Morris retired after a lengthy career with the Kansas Highway Patrol where he obtained the rank of Captain.  While with the KHP, Morris worked as a trooper and had been stationed in Jackson County.  Morris eventually became a K-9 handler and played a part in developing the KHP’s K-9 Program.  Morris eventually was promoted to the ranks of Lieutenant and Captain.  As Captain, Morris was in charge of Troop S which is the Emergency Services Unit.  This assignment placed Captain Morris in charge of the KHP’s entire K-9 Program, SWAT TEAMS and Bomb SQUADS. Scott Morris said “After my retirement I was fortunate enough to have the opportunity to go to work for Sheriff Morse and the Jackson County Sheriff’s Office.  I have always had much respect for Sheriff Morse, as well as the entire Sheriff’s staff, and was pleased to work for them.  Through the years I have had the privilege of working with a large number of law enforcement agencies and I believe that the Jackson County Sheriff’s Office is second to none.  I am proud to be a part of this agency, and I look forward to working with Sheriff Morse and the rest of the staff to continue to serve the Jackson County community.” Sheriff Morse said, “As Undersheriff, Morris will bring to the position many years of law enforcement and leadership experience. Sheriff Morse says “I have had the fortunate opportunity of working with Scott Morris over two decades.  He is a proven leader that is respected all across Kansas.  I anticipate that Scott Morris will help make a smooth transition with the duties of the Undersheriff.” Morse said jokingly, “My only concern will be the constant confusion between our last names.”