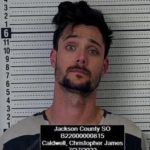 JACKSON COUNTY, Kan. (JASO) – Sheriff Tim Morse reports that a Texas man was arrested on Wednesday following a traffic stop near 102nd and U.S. 75 Hwy.  A Jackson County Deputy Sheriff stopped a tractor-trailer in reference to a complaint of erratic driving near Holton. Subsequent investigation into the matter resulted in the arrest of the driver, Christopher James Caldwell, 31, of Cypress, Texas.  Caldwell was booked into the Jackson County Jail for possession of cocaine, possession of a hallucinogenic drug and drug paraphernalia.