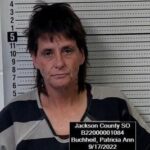 JACKSON COUNTY, Kan. (JASO) – Sheriff Tim Morse reports a Topeka woman was taken into custody early Saturday morning. Around 3:15 A.M., a Jackson County Sheriff’s Deputy stopped a 2002 Ford Explorer near 150th and U.S. Hwy 75.  The investigation into the stop led to the discovery of what was believed to be methampehtamine and drug paraphernalia.  The driver, Patricia Ann Buchheit, 52, of Topeka was arrested and booked into the Jackson County Jail.