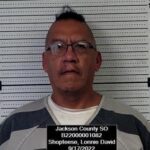 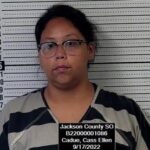 JACKSON COUNTY, Kan. (JASO) – Sheriff Tim Morse reports on September 17, 2022, at approximately 10:30 P.M., a Jackson County Sheriff’s Deputy conducted a traffic stop on a Nissan Altima on 150th and U.S. Hwy 75. Open containers, methamphetamine, marijuana and drug paraphernalia was discovered during the stop. A passenger, Cass Cadue, 27, of Mayetta, was wanted on outstanding felony warrants from Douglas County.  Cadue was arrested on the warrants and for transporting an open container. The driver, Lonnie Shopteese, 50, of Mayetta was arrested for possession of methamphetamine, possession of a hallucinogenic drug, possession of drug paraphernalia and transporting an open container.