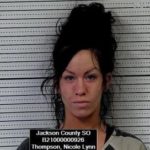 JACKSON COUNTY, Kan. (JASO) – Sheriff Tim Morse reports a Jackson County Sheriff’s Deputy arrested a woman on a Friday morning traffic stop in southern Jackson County.  A Jackson County Deputy stopped a vehicle on 118th Road west of US Hwy 75 after 8 a.m. after identifying that the driver’s license was suspended.  The driver, Nicole Lynn Thompson, 30, of Holton was arrested by deputies.  Thompson is being held in the Jackson County Jail for possession of methamphetamine, possession of a hallucinogenic drug, possession of drug paraphernalia and driving while suspended.