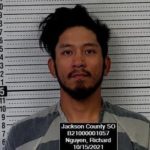 JACKSON COUNTY, Kan. (JASO) – Sheriff Tim Morse reports a Tennessee man was arrested following a Friday morning traffic stop.  A Jackson County Deputy stopped a 2018 Toyota Forerunner for an alleged traffic infraction around 8:30 a.m. on 126th Road east of Hwy 75.  During the course of the traffic stop, the deputy discovered illegal narcotics.  The driver, Richard Nguyen, 28, of Memphis, Tennessee was arrested for possession of cocaine, possession of a hallucinogenic drug, possession of drug paraphernalia and criminal use of a weapon.