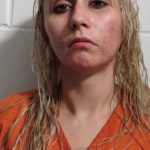 JACKSON COUNTY, Kan. (JASO) – Sheriff Tim Morse reports a Powhattan woman is in custody following a Wednesday night vehicle pursuit that started in southern Jackson County. A Jackson County Sheriff’s deputy attempted to stop a 2016 Chevy Equinox on US Hwy 75 near 110th Road for a traffic infraction shortly before 10:30 p.m. when the driver of the vehicle allegedly failed to stop.  The vehicle continued south into Shawnee County.  The Kansas Highway Patrol, Shawnee County Sheriff’s Office and the Topeka Police Department assisted with the incident. Several law enforcement agencies attempted to stop the pursuit with tire deflation devices which resulted in the deflation of two passenger side tires. The pursuit continued west on I-70 where the suspect vehicle left the interstate on Danbury Lane and sideswiped another vehicle.  The suspect vehicle continued striking a mailbox with the pursuit coming to a stop near Fairlawn and West Drive where the suspect was taken into custody.  The driver was identified as Chelsea Jean Finch, 28, of Powhattan.  The vehicle Finch was driving had been reported stolen out of Lawrence. Finch was transported to the Jackson County Jail where she is being held on charges of felony fleeing and eluding law enforcement,  possession of methamphetamine,  possession of drug paraphernalia, felony theft, identity theft, avoiding spike strips, reckless driving, driving while suspended, multiple counts of stolen property. Further charges on Finch are possible.  Finch is known to area law enforcement. In 2020, Finch was involved in a pursuit in Shawnee County. In 2018, Jackson County Deputies pulled finch through a ceiling in a Horton residence where she was hiding in an attic from law enforcement.