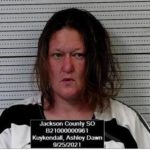 JACKSON COUNTY, Kan. (JASO) – Sheriff Tim Morse reports a Topeka woman was arrested early Saturday morning during a traffic stop near 110th and US Hwy 75.  A Jackson County Sheriff’s deputy conducted a traffic stop on a 1999 Toyota Corolla for a traffic infraction shortly after 3 a.m. A Jackson County Sheriff’s K-9 indicated with a positive alert for the presence of illegal narcotics within the vehicle.  The passenger, Ashley Dawn Kuykendall, 37, of Topeka, was arrested for felony distribution of a hallucinogenic drug and possession of drug paraphernalia.  The driver, Robert Jason Hobbs, 45, of Fairview, was arrested on an outstanding Brown County warrant for drugs.