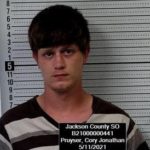 JACKSON COUNTY, Kan. (JASO)-Sheriff Tim Morse reports a man is in custody following a burglary in Hoyt. On Tuesday May 11th, at approximately 10:30 am, the Jackson County Sheriff’s Office received a report of a burglary and theft from a residence located at 110 W. 1st Street in the City of Hoyt. Deputies found a window broken in the residence and it was reported that a 65 inch flat screen T.V., a Play Station 4 and an electric sander was taken from the residence. Deputies and detectives along with the Shawnee County Sheriff’s Office and Kansas Highway Patrol located the suspect and missing items in Topeka where he was arrested near 8th and Fairlawn. The suspect, Cory Jonathon Pruyser, 29, of Topeka was arrested and booked into the Jackson County Jail for burglary, theft and criminal damage to property. Sheriff Morse appreciates the continued effort from Sheriff Hill and the members of the Shawnee County Sheriff’s Office for their cooperation and partnership in making both of our counties safer.