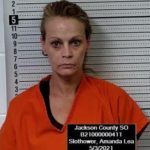 JACKSON COUNTY, Kan. (JASO)-Sheriff Tim Morse reports that a Wichita woman was arrested for drug charges following an early Monday morning traffic stop west of Mayetta. Shortly after 1:30 am, a Jackson County Sheriff’s deputy stopped a 2001 Saturn passenger car for a traffic infraction in the 12000 block of 150th Road. The deputy discovered contraband inside the vehicle. The driver, Amanda Lea Slothower, 43, of Wichita was arrested and booked in the Jackson County Jail for possession of methamphetamine, possession of drug paraphernalia, transporting and open container and driving while suspended.