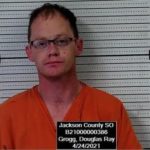 JACKSON COUNTY, Kan. (JASO)-Sheriff Tim Morse reports a Jackson County Sheriff’s deputy arrested an Iowa man on drug charges. On April 24, shortly after midnight, a deputy stopped a 2003 Honda Civic near K-16 Hwy and W. Road in eastern Jackson County for a traffic infraction. A sheriff’s office narcotics K-9 was deployed and alerted for the presence of narcotics in the vehicle. The driver, Douglas Ray Grogg, 38, of Villisca, Iowa, was arrested for possession of methamphetamine and drug paraphernalia. Grogg was booked into the Jackson County Jail.