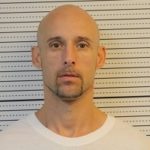 A Topeka man was taken into custody following the recovery of a stolen vehicle Wednesday. Deputies and detectives with the Jackson County Sheriff’s Office took Danny Joseph Belisle Jr., 44, of Topeka into custody at a residence located in the 17000 block of W. Road, south of Denison for felony possession of stolen property. Law enforcement officers located a 2017 Nissan Infinity that had been reported stolen from a Topeka car lot on Monday. The vehicle appeared to have been involved in an accident after it was stolen. Belisle remains in the Jackson County Jail.