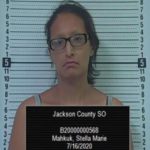 Sheriff Tim Morse reports that the Jackson County Sheriff’s Office was contacted shortly before 10 pm Thursday night of someone allegedly attempting to steal a vehicle in the 17000 block of R. Road near Mayetta. The caller stated someone was outside the residence and got into their vehicle and started it, and was revving the engine. Jackson County Deputies quickly arrived on scene and found a 2005 Dodge pickup belonging to the owner of the residence occupied by a female. The female was identified as Stella Mahkuk, 38, of Horton. Mahkuk was subsequently arrested for attempted theft of a motor vehicle and was booked into the Jackson County Jail.

Sheriff Morse reminds citizens to lock vehicle doors, and keep keys out of vehicles. Make sure to secure valuables and firearms when the vehicle is not in use. When something seems suspicious, follow your gut and contact law enforcement. Many people wait for a considerable amount of time before reporting suspicious situations. Delaying the reporting of a potential crime can result in something really bad happening or the perpetrator escaping. It takes not only law enforcement, but the citizenry working together with law enforcement to make our communities safe.