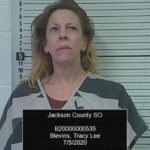 On July 5, 2020 at approximately 2 pm, the Jackson County Sheriff’s Office was notified of an alleged theft that occurred at the Holton Walmart. The report indicated that a female had taken some items from the store without paying. The description of the woman and the vehicle she was in was given to the Sheriff’s Office. A deputy stopped a vehicle matching the description near 126th Road on US Hwy 75. The female allegedly provided a false name to law enforcement, but the person was later identified as Tracy Lee Blevins, 48, of Topeka. Items believed to be stolen from the Holton Walmart were located inside the vehicle as well as substances believed to be methamphetamine and marijuana. Blevins was also allegedly in possession of credit cards, checks, and social security cards that belonged to other individuals. Blevins was booked into the Jackson County Jail for possession of methamphetamine, possession of marijuana, possession of drug paraphernalia, interference with law enforcement, identity theft, and theft.  Blevins also had outstanding warrants from other agencies.