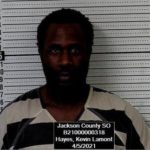 JACKSON COUNTY, Kan. (JASO)-Sheriff Tim Morse reports that a Topeka man was arrested on Monday following a traffic stop in Jackson County. A Jackson County Sheriff deputy stopped a vehicle for an alleged registration violation east of US Hwy 75 on 126th Road. Further investigation in the traffic stop led to the discovery of suspected illicit items within the vehicle. Deputies arrested the driver, Kevin Lamont Hayes, 33, of Topeka. Hayes was booked into the Jackson County Jail on the following charges: possession of methamphetamine, possession of drug paraphernalia, criminal carrying of weapons, driving with no license, no insurance.