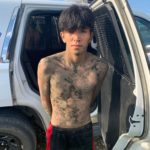 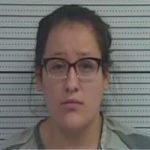 At approximately 4:30 pm Saturday afternoon, a Jackson County Sheriff’s Deputy attempted to stop a tan Chevy Malibu for a traffic infraction south of US 75 Hwy and Banner Ave. near Holton. The deputy signaled the vehicle to stop, and the vehicle stopped near the intersection. When the deputy approached the driver, the vehicle sped off heading eastbound on Banner Ave. then south on Q. Road. A vehicle pursuit ensued heading towards southeastern Jackson County. The vehicle headed east on 134th Road into Jefferson County when a Jefferson County Deputy deployed spikes puncturing the front right tire of the suspect’s vehicle. The vehicle continued east as the front tire disintegrated. The vehicle left the roadway through a fence on the south side of the road into a corral striking a cow. The vehicle crashed into a corral fence post. The two occupants of the vehicle fled on foot. The female passenger was quickly apprehended. A KHP helicopter, KHP K-9, Jackson County Sheriff’s K-9 arrived to the scene to search for the alleged male driver. The male suspect was captured around 6:30 pm. The Kansas Department of Wildlife and Parks and Tourism, Valley Falls Police Department, and the Hoyt Police Department also assisted with the incident. The pair was identified as Skye Joe Covers Up, 18, of Horton and Santana Kay Noriega, 21, of Mayetta. Both are being held in the Jackson County Jail. Noriega is being held on possession of methamphetamine, possession of marijuana, possession of drug paraphernalia, felony interference with law enforcement, and furnishing alcohol to a minor. The alleged driver, Skye Covers Up, is being held in the Jackson County Jail for felony fleeing and eluding a law enforcement officer, transporting an open container, driving while suspended, no insurance, felony interference with law enforcement, reckless driving, and felony criminal damage to property.